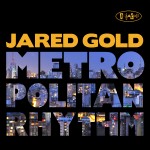 Jared Gold remains one of the most dependably creative artists in the Posi-Tone stable. He’s delivered an album a year for that label since arriving with Solids & Stripes (Posi-Tone, 2008), a date that, in many respects, set the tone for the other trio and quartet sessions that would follow. Here, on his eighth release for that imprint, Gold delivers a well-balanced set with his working trio—a group that features guitar veteran Dave Stryker and rising star drummer Kush Abadey .

This album’s title speaks to the heartbeat and buzz of city life—something that’s complex and not so easy to capture in music. With that in mind, Gold and company explore the metropolitan pulse, energy, and vibe in different manners; they don’t just focus on mile-a-minute, highly charged songs. The perfect example of this can be seen and felt with the back-to-back placement of “Homenagem” and “Risco”—two songs which look at two different sides of Brazilian music. The former is built on buoyancy and verve, the latter on unostentatious sway. Right there and then, Gold, Stryker, and Abadey make it clear that city life isn’t so simple or uniform in its unfolding.

Having said all of that, it should still be noted that these three know how to cook. Their energized take on Stryker’s “As Is” and their trip through Joe Henderson‘s “Granted”—an adrenalized thrill ride—makes that clear. Elsewhere, they turn in other directions. “God Has Smiled On Me” starts in hymn-like fashion before the band catches the spirit, “Maybe I’m Amazed” is reborn as a groove-friendly number, and Thelonious Monk‘s “Let’s Call This” becomes a more rhythmically fluid and less idiosyncratic vehicle in the hands of this trio.

With Metropolitan Rhythm, Gold manages to paint a multi-dimensional picture of urban life that finds balance between drive and restraint, power and finesse, and tradition and innovation.

It’s back to the Trio format for the new CD from organistJared Gold.  “Metropolitan Rhythm” is the 8th release on Posi-Tone Records and the 4th to feature guitarist Dave Stryker. Filling out the rhythm section is the young drummerKush Abadey (known for his work with trumpeter Wallace Roney and the son of drummer/composer/educator Nasal Abadey. Gold is quite the melodic player and he works well with Stryker. The New Jersey native, who has worked with numerous artists including saxophonist Oliver Lake, has chosen an intelligent mix of pieces for the new disk ranging from pop tunes such as “Maybe I’m Amazed” to high-energy romps such as Joe Henderson’s “Granted” to the rich gospel melody of Isiah Jones'”God Has Smiled on Me.”   Gold et al have a fun yet  sophisticated time with Thelonious Monk’s “Let’s Call This“, changing tempos and giving the piece sections where the trio gets deep into the groove.  Where the Charette trio CD above has a funky feel, the Gold trio likes to swing, often with a vengeance. On Stryker’s “As Is“, Abadey sets a wicked pace, propelling the guitarist and organist forward with great glee.  Soft guitar lines and gentle brush work lead the way into “Risco“, a sweet samba that may take listeners back to the 1960s sounds of organist Walter Wanderley.

“Metropolitan Rhythm” is one of those sneakily seductive albums in that the music might not blow you away on first listen but grows on you each time you return.  The CD has 9 tunes in 48 minutes and only one (the Monk piece) over 6.  Dave Stryker shows his worth as both a rhythm guitarist and soloist while Kush Abadey keeps the music percolating without much fuss but great flair.  Jared Gold has proven himself to be a fine soloist and he continues to mature as a composer (his “In A Daze” is a bluesy treat).  This music sounds great on the back porch on an early summer afternoon.

Blessed with a surname suited to the effortless production of album title puns, organist Jared Gold is admirably no-nonsense when it comes to his music. Golden Child, his fifth recording for the Positone label, remains an outlier with his other projects reflecting resilience in refraining from caving to comedic temptation. The usual suspects are discernible in his B-3 sound, with Don Patterson and Larry Young particularly prevalent forefathers, but Gold brings his own tools to the game as well with a sound enamored of groove, but rarely beholden to it.

Gold’s eighth effort, Metropolitan Rhythm, relies in no small part on that prudent strategy and serves as a vehicle for his working trio with guitarist Dave Stryker and drummer Kush Abadey. Stryker’s no stranger to classic organ trio configuration with a large percentage of his voluminous discography given over to the format. Abadey is a comparative newcomer to the New York scene of which Gold and Stryker a part, but he handles his duties behind the kit with a crisp attack and a clear sense of purpose.

Nine tracks take the congenial collective guise of a blowing session with Gold composing four, a single entry form Stryker and the rest given over to covers of varying provenance. “Check-In” is a straightforward mid-tempo burner on the surface, but Gold folds in a surprising break of swirling, nearly atonal sweeps that nod in the direction of Larry Young. Stryker comps warmly behind the leader before working through his own statement with Abadey’s light cymbal play keeping loose time. In contrast, Paul McCartney’s “Maybe I’m Amazed” brings practically unavoidable and mostly unflattering AM radio fare comparisons in a finger-snapping, organ-centric incarnation.

Gold regains footing with a fleet foray through Monk’s “Let’s Call This” with shimmering swells once again a principal part of the tonal paint box. Stryker’s amplified notes occupy similar textural space in accenting Gold’s leads, although he gets a bit obvious and flashy in his solo. Once again Abadey holds it all together with pliable tempo shifts and sharp demarcations. A lush gospel detour through “God Has Smiled On Me” gives way to the more exploratory Gold original “Homenagem” with the composer flipping the switches for a ripe and rotund sound over a bustling samba style beat.

“Risco” retains a breezy Brazilian flavor but a verdant ballad pace with Abadey applying light brushwork beneath solos from Stryker and Gold that are saturated in warmly enveloping electricity. A brisk Joe Henderson-penned slice of Blue Note-era hardbop outfitted with finger-abrading solos from Stryker and the leader sets up a closing one-two compositional punch each with Gold’s “In a Daze” out of the gate first. A gradual groover, the piece is a bit sluggish in the opening statement, but it opens up through Gold’s ensuing improvisation. Stryker’s “As Is” caps the set with a return to Latin roots and an up-tempo exit. More silver than gold (sorry, couldn’t resist), this date still has much to recommend it for listeners amenable to the aural pleasures of organ jazz.

JARED GOLD/Metropolitan Rhythm:  This B3 ace continues to be the backbone of the

label as he delivers his 8th for them without a false note in the bunch yet.  With

Dave Stryker’s guitar backing him up, Gold continues to show he can do no wrong no

matter how far a field he let’s his organ wander.  Easy going, fun to hear stuff

that just doesn’t wear out it’s welcome.  Check it out.