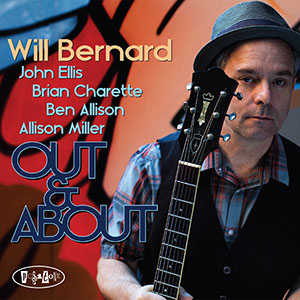 As if more proof was necessary Out & About confirms guitarist Will Bernard is as skilled a bandleader as he is an instrumentalist. And both roles require an artful approach as this album makes clear: it’s one thing to find talented musicians-as Bernard most certainly does here-it’s quite another to elicit that talent in such a way it complements the talent (and personality) of each of the other musicians involved.

In this context then Out & About is a most ambitious undertaking because Bernard enlists the assistance of three other formidable musicians: drummer Allison Miller, bassist Ben Allison and saxophonist John Ellis, all with their own careers and ensembles of some note and history (and based on that reality alone, some measurable and presumably healthy ego). But the San Francisco Bay Area guitarist also demonstrates the wisdom to preserve his relationship with long-time trio partner, organist Brian Charette, who acts as a combination catalyst and bonding agent unifying this quintet for the sake of the recording.

The five-some lightheartedly dance through “Happy Belated,” illustrating the easy going interactions of which they’re capable, then spend a little less than two minutes illustrating the grace and delicacy they can create on “Not too Fancy.” And, as “Next Guest” attests, it hardly matters who’s soloing here at any give time because, even as Bernard fingers his fret board with such precision here, Allison is almost equally so on bass, never colliding with the guitarist, but acting as a counterpoint as if to highlight the leader’s skill.

The album’s longest track at 6:45, “Habanera” features Charette drawing out the melody line in an altogether luxurious pace, but that doesn’t obscure the motion of Miller at her kit: her playing is so natural, it’s vivid enough to visualize. Meanwhile, Bernard leads by example, he using sufficiently varied tones and attacks to keep himself and all involved alert in a state of positive flux. Accordingly, Ellis twists and turns playing his horn on “Redwood (Business Casual)” where everyone is quick on the uptake of each other’s ideas. The leader unwinds more fluid lines on “Pan Seared,” and the keyboardist instinctively follows suit.

All of which such interplay is especially admirable given the economy of arrangement and production (by Marc Free from one day of recording in Brooklyn) within cuts in the three-to-five minute duration range. But then what better way to illustrate the versatility of a band than for it to move quick through the various changes Bernard presents in this all-original material. His understated vigor in this musicianship on the title song and “Homebody” insinuates the sounds within the listener’ Out & About will not recede into mere background music.

Doug Collette  –  All About Jazz

It’s never an easy ask, playing Will Bernard’s whimsical music. Then playing it well. Then playing it this well. But this quintet led by none other than Will Bernard himself makes it seem so elemental and easy. And mind you this repertoire might seem easy if you read the names of the tunes out aloud. But make no mistake the music is diabolical but if this benchmark recording is a significant one it is only because of the musicians who are on it. Bernard aside, who could fault the intellect and intuition of John Ellis, Brian Charette, Ben Allison, and Allison Miller?

They certainly bring out the best in Bernard and his music as they expertly negotiate the music’s paradoxical demands. On the one hand there’s the illusion of wild, rasping abandon, a willingness to embrace the rough-grained sound world without inhibition. On the other, not a note seems to be out of place. The musicians handle the harsh gear-shifts with flawless rhythmic control, most obviously in the lurching ‘Habanera’. It is chiefly their emotional agility, however, that makes this disc so compelling, placing emphasis where it should be: on the works’ underlying narratives. In this it would seem that the musicians were made for this music just as much as the music was written just for them. NOt many recordings these days would dare make such a claim.

What keeps us gripped, in this music is not the stranglehold of the guitarist’s zealous rage, but also his sense of wailing despair. This element in Will Bernard’s playing is beautifully upheld by the stabbing notes of John Ellis’ tenor saxophone, the growling bottom tones of Ben Allison’s bass and the depth bombs of Allison Miller’s drumming as well as the exuberant runs and arpeggios of Ben Charette’s Hammond B3. There are eleven superb tracks that make this happen and still I was left wanting for more. In terms of sheer drive this guitar music compares with the best.

The performance is vigorous and full-bodied. Much of this has to do with Will Bernard’s idiomatic-sounding chords and phrasing. Bernard also plays particularly well laying his music down contrapuntally with Brian Charette’s organ and John Ellis often jumps in to make it a three-way counterpoint as he races ahead of and dallies behind the beat exchanging places with Bernard and Charette. The quintet fully reflects on the works’ autobiographical nature, indulging in moments of poignant introspection. But it’s in the sun-soaked charm of tunes such as ‘Redwood (business casual)’ and ‘Pan Seared’ and the ebullient opening to ‘Homebody’ that the musicians reveal themselves in all their glory as the music unfolds at its angular best.

For his 8th album as a leader (and 2nd for PosiTone Records), guitarist and composer Will Bernard went into the studio with a crackling rhythm section (drummer Allison Miller and bassist Ben Allison), organist Brian Charette, and saxophonist John Ellis.  While Bernard is often found in situations where he is called on to be “funky”, his PosiTone recordings have given him the space to expand.

“Out & About” gives the listener much to chew on.  Bernard composed all the tracks and there’s a great deal of interaction throughout as well as impressive melodies for participants to “play” with.  The presence of Ben Allison actually gives the composer more melodic voices to work with (his previous recording had Charette supplying the bass lines on organ) and Bernard uses the bassist to great effect. Listen to the short guitar-bass duet on “Not Too Fancy“, Allison’s strong solo on the Latin-infused “Habanera“, and his solid support on the ballad “Pan Seared” to hear how much the bassist adds to the session

Ms. Miller is an excellent addition (Rudy Royston powered the previous disk), a wonderfully subtle drummer who knows how to drive a band but can also create a shimmering world of sound. Her melodic take on the title track is quite attractive as is her work on the ride cymbal on “Redwood (business casual)“.  Her dancing brushes on “Homebody” set the tempo and the mood for Ellis and Bernard.  Notice how she changes her approach under the organ and then the tenor solo on “Full Sweep.”

Brian Charette is a plus to any recording, surprising the listener with his many tones and good background work.  He can roar and whisper, often in the same cut – listen to his swells behind the guitar solo on “Homeward Bound.”  His solo on “Full Sweep” is short but so exciting as he romps over Ms. Miller’s dancing rhythms.

The presence of John Ellis enlivened the first PosiTone CD and does the same here.  His liquid lines an warm tones on pieces such as “Next Guest” and “Homebody” mesh well with Bernard’s excellent rhythm guitar and counterpoint.  He can “rock out” as well; his bluesy frolic over the guitarist’s “wah-wah” support on the CDs frisky opener “Happy Belated” is wonderfully funky.

Will Bernard is a guitarist who rarely, if ever, wastes notes.  On “Out & About“, he cedes a good amount of the solo space to his talented band.  Yet, he’s there supplying supportive chords and lively melodies. When the guitarist “steps out”, his clean, quite clear, tone and well-formed solos steer clear of cliches and often are quite adventurous. Best of all, Bernard can write compelling melodies, even on “groove-based” tracks.  It’s a pleasure to listen to such mature music and have such a good time doing so. 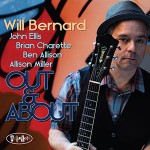 Will Bernard has received his due for sideman work in a variety of settings, but you rarely hear anybody talk about stylistic range when it comes to his own leader dates. This is the album that could—and should—change that. Over the course of eleven originals, Bernard continually frames himself in different ways, constantly redefining his outlook and mining fresh musical veins with some help from four A-list musicians—organist Brian Charette, saxophonist John Ellis, bassist Ben Allison, and drummer Allison Miller. It’s a winning formula, making Out & About an out-and-out success.

The album opens with “Happy Belated,” a funky number with a twist or two that falls right into Bernard’s comfort zone. Allison’s fulsome bass and Miller’s solid drumming lock everything in place, Bernard and Ellis sync up when an angular interlude appears, and metric adjustments are made without altering the natural feel of the piece. It’s a number that could’ve set Bernard up perfectly for a funk-themed record, but he doesn’t oblige. Instead, he turns sharply at every opportunity. “Not Too Fancy”—a brief and intimate guitar-and-bass duo that’s quaint, serene, and comforting—follows, completely changing the direction implied with “Happy Belated.” Then there’s “Next Guest,” a piece that flies and gives Ellis, Bernard, Allison, and Miller a chance to really dialogue with one another; “Habenera,” a shape-shifting avant-tango that benefits from Charette’s out-of-the-box organ work; “Redwood (Business Casual),” a number energized by Miller’s propulsive ride cymbal and powerful soloing; and “Homeward Bound,” a straight-eighth selection that plays up the partnership between rhythmic recurrence and mood evolution.

With each of the five numbers that remain, Bernard and his buddies continue to defy expectations. “Homebody” carries some heartland inflections and gives Ellis and Bernard a chance to continually cross paths and dance, “Suggested Reading” sets Bernard’s slinky guitar against Allison’s stout yet slippery bass lines and Miller’s happening grooves, and “Full Sweep” delivers wonderfully off-balanced hits and harmonic shifts. Then things wind down with a gravity-reduced exploration called “Pan Seared” and the swaying title track. After all of that it’s tempting to see this as an identity crisis record. The truth, however, is something much simpler: This is Will Bernard, in all of his multifaceted glory.