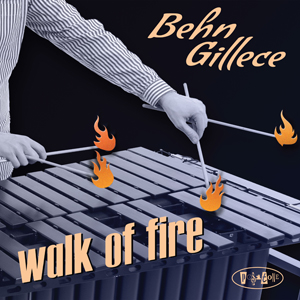 Vibraphonist Behn Gillece has been a fixture on the New York jazz scene for the past decade, notably in his project with one of this era’s great tenor sax player/composers, Ken Fowser. Gillece also has a cooker of a new album, Walk Of Fire due out mid-month from Posi-Tone Records and a show coming up on August 5 at 10:30 PM at his Manhattan home base, Smalls. Cover is the usual $20.

This is the most straight-ahead, unselfconsciously infectious stuff that the prolific, often ambitiously eclectic Gillece has come up with since his days with Fowser. The title track, a terse, brisk swing shuffle, opens the album. Listen closely to pianist Adam Birnbaum’s judicious, rhythmic chord clusters and you may get the impression that the song was originally written for Rhodes. Or maybe that’s just what vibraphonists come up with. Trombonist Michael Dease contributes a leapfrogging solo, and then the high-powered frontline – also comprising trumpeter Bruce Harris and tenor player Walt Weiskopf – are out.

Fantasia Brasileira, true to its title, is an easygoing bossa that Dease takes to New Orleans before Gillece ripples gracefully through the horn section’s big raindrop splashes.. Moodily resonant horns rise over bassist Clovis Nicolas and drummer Jason Tiemann’s blithe, latin-tinged, fingersnapping stroll in Bag’s Mood, Harris taking a low-key turn in the spotlight before the bandleader raises the ante.

Gillece and Birnbaum blend subtly intertwining lines and then shift into separate lanes in the moody Reflective Current, a quartet number. Something New follows a similarly pensive, waltzing tempo: the point where the vamping grey-sky horns drop out completely makes a tasty jolt to the ears.  Specter, a catchy, vamping clave number, features Gillece’s most expansive but purposeful solo in this set and a welcome, tantalizingly brief confrontation between vibes and piano.

Break Tune has a subtle juxtaposition of steady, emphatic swing and allusive melody, echoed by Weiskopf before Gillece goes vamping and Harris spirals triumphantly. Artful metric shifts and Gillece’s rippling staccato raise the vamps of the concluding tune, Celestial Tidings above the level of generic. Marc Free’s production is characteristically crisp: the lows on the concert grand piano cut through as much as every flick of the cymbals.

It takes but one ‘third’ to recognise the ‘hand’ of Art Tatum in ‘Willow Weep for Me’, a ‘flatted fifth’ to pick out Charlie Parker in any orchestral line up, a ‘seventh’ to do the same with Milt Jackson and while it may take a little while to pick out Behn Gillece from a flurry of notes, his vivid harmonic approach to the vibraphone is fast becoming his indelible signature, quite apart from the other two-handed vibraphone players out there as he cuts to the quick with every new song he performs.

Dare to Be is the record that puts Gillece in a maze of mirrors in which reflections of past masters of the vibraphone can confound a young player of an instrument glorified by the likes of Red Norvo, Milt Jackson and Bobby Hutcherson. But certainly on this album, Behn Gillece breaks out. His ethereally resonant notes sound more knowing as the music on the album progresses. The positive surges of melody leap from a performance that juxtaposes utmost delicacy with eruptive power. Similar mastery of contrast makes Gillece’s account of a blues quite memorable and affecting. His playing is intensely alive to expressive nuance, textural clarity and elastic shaping, and his sound maintains a glow even at the most torrential moments.

Gillece has assembled a stellar group ion this rite of passage. Chief among them is Ugonna Okegwo, a bassist who, along with Jason Tiemann Nate Radley and Bruce Harris, provides the musical luminosity, spaciousness and zest from which Gillece’s fertile imagination takes flight. Ten graceful episodes fill this performance. Each is a gleaming gem, from the lilting melancholy of ‘Amethyst’ to the graceful spaciousness of ‘Dare to Be’ and the daring-do of ‘Trapezoid’ and the lilting buoyancy of ‘A Time for Love’. But no matter how virtuosic a performer you might be let’s be clear: you don’t adopt Jazz. The Music adopts you and it now eminently clear that it has taken Gillece under its wing.

As crazy as it may sound, learning how to be your true self doesn‘t happen overnight. It takes quite a while for musicians to get comfortable in their own skin, find their real voice, and dare to move forward toward their musical ideal. For vibraphonist Behn Gillece, that level of comfort is now a reality and the moment is right and ripe for such a move.
After releasing a series of well received albums in collaboration with saxophonist Ken Fowser and making waves with his debut – Mindset (Posi-Tone Records, 2015) Gillece returns with a new band and vision for his stellar sophomore outing. Using the great Gary Burton‘s Duster (RCA 1967) as model and touchstone here, Gillece convenes a piano-less quartet that focuses on the combination of his vibraphone and Nate Radley‘s guitar. The two complement each other in every way. If one takes off on a solo flight the other is there with firm yet cushiony comping; if one needs a boost, the other digs in the spurs; and if one is looking to move in a different direction, the other is always right there to make that a reality, amplify the intentions in the music, or, if needed, cut against the grain. It’s a perfect pairing, pushing the music to great heights at every turn.
The majority of Dare To Be’s ten tracks are originals that speak to the leader’s openness, cleverness, and melodic soul. “Camera Eyes” moves from a dreamy vibes and guitar rubato zone to full band swing with bassist Ugonna Okegwo and drummer Jason Tiemann driving the car; “Amethyst” strikes the perfect lazy and loping pose, as bluesy and woozy thoughts carry the day; “Live it” – one of several tracks to bring guest trumpeter Bruce Harris aboard – delivers a highly catchy and cheery melody over a straight eighth foundation; and “Trapezoid” cooks with high heat and delivers one of Gillece’s strongest solo showings on the date. The two covers – “Same Shame” a husk of a Bobby Hutcherson vehicle that leaves plenty of room for exploration, and “A Time For Love,” a Johnny Mandel and Paul Francis Webster ballad classic that closes the album – sit well in the mix, but Gillece’s own music is the real draw here.

There should be a law that compels every vibraphonist on the jazz scene to record one album per year with a guitarist.  Of the pool of possible combinations, the marriage of those two instruments is one of the happier pairings there is, and this holds true whether the form of expression is one that stretches out to the fringes of jazz or if the music plants itself dead center in jazz territory.  The newest from vibraphonist Behn Gillece falls in the latter category, and his Dare to Be match-up with guitarist Nate Radley is yet further evidence that a law is not an unreasonable demand.

The up-tempo “Signals” moves at a frenetic pace, with drummer Jason Tiemann and bassist Ugonna Okegwo providing all the rocket fuel they can get their hands on, but nothing about that stops Gillece from a patient lyricism to accompany Radley’s speedy guitar lines.  And when trumpeter Bruce Harris charges down the center of “Drought’s End,” Radley and Gillece exhibit their combo’s dexterity by circling around and meeting at the other side of the solo.

But the album’s best personality shows on the less conventional tracks.  A rendition of Bobby Hutcherson’s “Same Shame” has an alluring melodicism to go with a nervous tempo, and both vibes and guitar take advantage of the resulting conflict of emotional tones.  Opening track “Camera Eyes” opens dreamily, and very much suits the tranquil sighs from both vibes and guitar.  The chipper “Live It” pushes all-in on the sunshine with a catchy melody and a tuneful attitude.

Aside from the slow blues of “Amethyst” and a cover of Johnny Mandel’s “A Time for Love,” this is an album consisting primarily of burners.  And considering how up-tempo tunes bring out the best from vibes and guitar in their (potential) dual role as melodic voice and rhythmic support, it’s not an unwise strategic decision to adopt.  Similarly, scooping this nifty recording up also falls under the category of “wise decisions.”

Dave Sumner – Bird is the Worm

When it comes to jazz vibraphone, the names of Stefon Harris and Warren Wolf are most likely to be found on a list of contemporary leaders. Add to that now the name of Behn Gillece, a gentleman who has been honing his skills on the New York scene since 2006. His talents first came to the attention of this reviewer having been a spirited voice on Walt Weiskopf‘s most recent albums, Overdrive and The Way You Say It. Last year, he debuted as a leader with the album Mindset, this sophomore offering coming fast on its heels.

Gillece has obviously taken in the history of his instrument, but speaks with a singular voice and purpose. His tone and attack are on the softer side, not unlike the work of Bobby Hutcherson. Also quite notable, he writes the majority of his own compositions. This too is a major factor in his clarity of purpose, along with the fact that his ensemble choice is an inspired one. A student of Jon Faddis‘ who is making a name for himself on the current scene, trumpeter Bruce Harris can be heard on three tracks. Gillece makes the most of the unique blend between horn and vibes, especially when it comes to the muted trumpet on “From Your Perspective.”

More integral to the entire set is guitarist Nate Radley, who is a perfect foil for Gillece. His chordal accompaniment and solo lines support the vibes in a manner quite different than a piano might do. The soulful “Amethyst” is a perfect spot to sample Radley’s tonal range, from single note riffs to dark and brooding washes of sound. Bobby Hutcherson’s “Same Shame” even finds the guitarist sporting a Frisell-like tone that is pure Americana.

Veteran bassist Ugonna Okegwo and talented drummer on the rise Jason Tiemann are also integral to the proceedings. Dig their tight up tempo slam throughout “Signals” or the way they inject a straight-eighth feel to both “Live It” and “Dare to Be.” As for Gillece himself, there’s quite of range of abilities on display here. Be it the burning bebop of “Trapezoid” or the mature ballad statement delivered on Johnny Mandel’s “A Time for Love,” Gillece gets down to serious business and he’s a name we should be hearing more and more of in the coming years.

The vibe ace might have dedicated this set to Gary Burton, but he tips the cap to Bobby Hutcherson as well.  And he probably has Milt Jackson in the back of his mind.  A different sounding set that what he’s turned in on past dates, Gillece is in command of his ax as well as his position as a leader.  Quite an engaging date that’s a real tonic for jaded (Tjaded?) ears, this is a swell serving of mighty fine sitting down jazz sure to get you shaking in your seat.  Well done throughout.