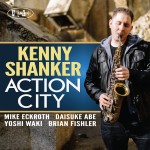 Saxophonist Kenny Shanker was eight years post-graduation before recording his debut album, Steppin’ Up, which took another two years to get its 2011 release on Posi-tone records. So admirers of the New York based musician could be forgiven for not expecting album number two quite so soon. But here it is,Action City: released just 17 months after it was recorded and readily fulfilling the promise of the debut.

Just what kind of action does Shanker find in Action City? It’s varied. “Times Square” is cool, hip, confident: action with style, reflected in Shanker’s equally cool alto. The gently-swinging “Another Morning”—the band in a relaxed and relaxing groove—might just represent the low-key, coffee and orange juice, action that results from too much excitement the night before. “Midnight” is in a similarly gentle vein, as is the sweet “Riverbank At Dawn,” while the action on “The Tortoise And The Hare” is race-track tense, the up-tempo sections showcasing Shanker and pianist Mike Eckroth‘s talent at fleet-fingered be-bop.

The quintet’s remaining members—including Eckroth, bassist Yoshi Waki and drummerBrian Fishler from Steppin’ Up—are solidly in tune with Shanker’s playing and writing. Eckroth is almost as prominent as Shanker in terms of lead roles—his solos on “Shadow Dance” and “Midnight” are fine examples of fluid, melodic, playing. Daisuke Abe‘s guitar is relatively under-used, but always pertinent: it would have been great to hear more of this considered player.

The decision to fill the album with Shanker’s original compositions, rather than mix in a few songbook standards, works well. He’s a strong writer, the tunes are in the straight-ahead tradition but with a freshness and a contemporary edge. Action City moves things on from Shanker’s debut, offering further proof of his development as an artist and writer. YouTube provides evidence of Shanker the vocalist too—something extra for album number three?

It’s fairly uncommon for a mainstream jazz record to contain nothing but originals, especially since playing standards seem nearly as important to jazz as being able to swing. Perhaps it’s because so few jazz musicians are strong enough composers to fill an entire album of their songs. That may or may not be the case, but it’s definitely not the case for saxophonist Kenny Shanker……

Choice songwriting and choice means of bringing them to life make Action City another strong offering from the talented Kenny Shanker.

Everything here centers around a tight piano/sax/bass/drums pulse. The first tune, Times Square is an interesting one – it seems to offer some shelter from the bustling rush hour crowd outside, Eckroth spinning an intricately enticing web away from the driving latin groove until Shanker brings it back with a similarly swirling but more angst-fueled intensity. It paints a good picture, albeit without the sketchy life-size Hello Kittys.

Another Morning is all about urbane chillout swing, Shanker’s carefree vibrato sailing over Eckroth’s precise, purposeful chords and spacious tradeoffs with the drums. This seems to portray the kind of stainless steel counter place where they break out the martinis starting at around noon.

Summer Siesta is a deliciously catchy, biting cha-cha, and not the least bit sleepy. The title track is a brisk stroll, everybody in the band occasionally stepping out of time as we do from time to time on a busy sidewalk: Eckroth’s bluesy, stride-inspired solo is especially choice. Punch isn’t the smackdown you might expect, but a very attractive slow soul groove, Eckroth firing off some tasty blues/gospel licks. Donald Fagen would kill to have written this.

Eckroth stays in the spotlight through the spacious, stately, neoromantically marching Prelude, which gives way to Shadow Dance, a cool jazz waltz where the sax does exactly that to the piano. The most striking track here is Midnight, crescendoing on the wings of some blue-flame eights from Shanker until Eckroth takes it back into the back of the bar where everybody’s still hanging after closing time. Marble Hill offers a no-nonsense but warmly congenial, nocturnal North Bronx tableau – it would have made a good nostalgic tv theme back in the 70s. Tortoise & the Hare scampers along as Shanker and Abe flurry and bob, a contrast with the balmy boudoir ballad Riverbank at Dawn: hey, outdoors is cooler in the summer. Interestingly, Shanker winds up the album with a catchy, dynamically-charged Philly soul groove titled Snow Paws. You don’t have to be a New Yorker (Shanker’s not) to appreciate this. But it helps.

Shanker’s sophomore release on the acclaimed Posi-Tone label shows an exponential growth for an artist whose musical stock should be an arrow pointing straight up! This quintet can swing like a beast and given the fact that Action City boasts all original compositions, Kenny Shanker is indeed a rising star!

The band is A list and his regular rhythm section to boot so the chemistry leaps from your speakers. A gifted and intense lyrical surgeon, Kenny Shanker’s tone has grown yet never overshadows this amazing collective. Pianist Mike Eckroth, bassist Yoshi Waki and drummer Brian Fishler are all working from the same page of the Shanker harmonic playbook. An old fashioned straight ahead blowing sessions with contemporary compositions, it doesn’t get much better than this. While the percussive and more Latin influenced “Summer Siesta” smolders, the gorgeous ballad “Another Morning” may just be the hidden gem of the release.

Action City has surprises for everyone and is easily one of the best for 2014.