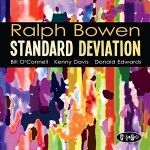 Ralph Bowen – Standard Deviation (Posi-Tone, 2014) Ralph Bowen is widely active in New Jersey and New York as a saxophonist and educator. This album finds him recording selections from the standard repertoire in the company of of Bill O’Connell on piano, Kenny Davis on bass and Donald Edwards on drums. Although the material on this album is quite familiar, they play the music with self-confidence and assurance. Opening with the medium tempo “Isn’t It Romantic” in which they pursue the music in a patient and thoughtful manner, the group uses the melodic material to unlock more of potential of the music like on the well known song “Yesterdays” where Bowen begins the song at a ballad tempo before slowly ramping up his solo to a fine faster statement. This album may not reinvent the wheel, but for fans of the popular songbook, this is classy and accessible jazz that is sure to please.