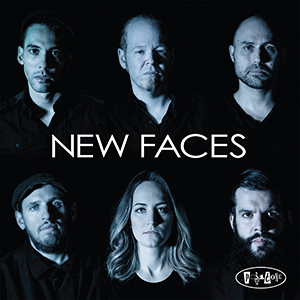 The independent label Posi Tone Records has the mantra “…to provide the highest quality recordings of the most relevant musicians on today’s jazz scene.” Co-owners producer Marc Free and engineer Nick O’Toole have been doing just that since 1994.  It seems 2018 will be no different. Free assembled his New Faces group from musician members of the Posi Tone stable of artists and produced a very satisfying new album aptly titled Straight Forward which will be released on January 12, 2018.

It’s a group of like-minded, young musicians who, based on this successful outing, have a long future together if they want it.  The group includes Josh Lawrence’s trumpet, Roxy Coss’ saxophone, the gossamer touch of vibraphonist Behn Gillece and the young pianist Theo Hill with the rhythm section of Peter Brendler on bass and Vinnie Sperrazza on drums.

The group offers a tight, well executed set of music; compositions  that were culled partially from the Posi-Tone archives, but also includes two original compositions by trumpeter Lawrence and three by vibraphonist Gillece. There is one Herbie Hancock composition, “King Cobra,” that is particularly representative of the 50’s and 60’s Blue Note era, a recording model that Posi-Tone has clearly fashioned their own musical aspirations after.

The set starts out with a Jon Davis swinger titled “Happy Juice.”  Right away you perceive a chorus of instruments-trumpet, piano, saxophone and vibes-that have acquired the ability to meld their individual voices into a complimentary, unified sound that delights the ears. Trumpeter Lawrence has a clear easy flow to his playing. Coss’s saxophone tone is mellow and lustrous.Pianist Hill is rock steady throughout, but it is Gillece’s tubular vibe sound that subtly dominates here, driving the tune forward as the rhythm section of Brendler and Sperrazza provide the rhythmic base.

What I like about this group is that they relish ensemble playing over lengthy individual solos. The haunting “Delilah Was A libra” is opened with a penetrating lead in by Gillece. Hill and Coss offer two short but poignant solos before Lawrence enters with a brief but potent trumpet statement. It’s the group speak that you come away admiring here.

On Brian Charette’s jaunty “West Village” the front line states the melody in unison, before Josh Lawrence’s muted trumpet solo raises the heat. A brief but imaginative solo by Coss leads to Gillece’s darting vibes play. The notes seem to take flight off his mallets like wood nymphs alit in a forest. This song was originally played by an organ trio, but here the group utilizes the additional instrumentation to great effect as Brendler and Sperrazza drive the beat.

The Herbie Hancock classic, “King Cobra,” is played by a tight front line stating the serpentine melody in unison, with a sound reminiscent of the old Blue Note magic. Pianist Hill’s repeated chord lines sets the time throughout.  Saxophonist Coss’s tone is buttery soft, uncluttered and warm and Hill plays nicely off her changes of direction.  Lawrence’s trumpet solo is well paced and understated. The music captures much of the electricity of the original recording.

The album continues with bright “I’m Here” which offers solos by Lawrence, Hill, Coss and Gillece respectively. The first of Gilcee’s three compositions on the album is up next with “Down the Pike,” a medium tempo swinger that offers some clever changes. Josh Lawrence’s’ driving blues, “Hush Puppy” keeps the proceedings moving with some Tyner-esque-like playing by Hill and a pulsing beat by Brendler. Lawrence’s muted trumpet, Coss’s mellow horn and Gillece’s vibes all add to the mix as Sperazza dazzles on traps.

Perhaps my favorite cut on the album is “Vortex,” a circular composition that features some of Coss’s most evocatively sensitive playing and spurs the vibraphonist/composer Gillece into some of his most exploratory adventures on the album. This one is bound to become a classic.

“Follow Suit” is another Gillece composition that was clearly influenced by those sterling Blue Note years. The vibraphonist double-times his playing here as Brendler and Sperrazza maintain the torrid pace.  Lawrence and Coss both offer fiery solos and Hill’s piano solo is frenetic.

Not sure if New Faces was intended as a one off to start the year, but with such an auspicious first album, perhaps New Faces is destined to become a regular Posi Tone featured group.