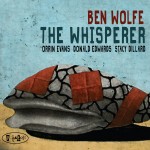 While swimming in the rather large body of sounds that comprise the jazz mainstream, Ben Wolfe‘s The Whisperer evinces no obvious stylistic points of reference or influence, possesses unusual depth, and adds up to something larger and more significant than a composite of impressive individual performances. Wolfe’s compositions—eleven out of the disc’s twelve tracks—comprise the record’s core. He crafts melodies that are familiar in a good way, and encases them in tightly knit, logical, non-standard forms.

There’s a marvelous sense of connectedness in the compositions, ensemble playing, and the overall relationship between Wolfe’s bass, tenor and soprano saxophonist Stacy Dillard, pianist Orrin Evans, and drummer Donald Edwards—as well as trumpeter Josh Evans, who plays on one track. Most of these musicians have displayed resolute, highly individualistic personalities on previous recording projects. Throughout The Whisperer they seem to be laying back just a little, each curtailing a determined stride down his own path in favor of intently listening and thoughtfully responding to one another. In small doses their strengths are magnified. The totality of all of these overlapping relationships makes it hard to imagine the compositions without the individuals playing them; conversely, it’s difficult to fathom the rich, nuanced, performances outside of the context of Wolfe’s compositions.

The Whisperer is a record that resists the isolating of crowning moments. Wolfe’s and Edwards’ introductions to the middling-to-up tempo tracks “S.T.F.U.” and “The Balcony” epitomize supple and authoritative swing. Edwards’ deliberate, murmuring time at the onset of “Hat In Hand” sets things up while barely causing a ripple. Throughout Orrin Evans’ solo on “The Whisperer,” the pianist engages Wolfe and Edwards in a firm, percussive push forward. Towards the end of “Becoming Brothers,” the quartet stretches the theme in various ways without betraying its essence. Framed by Evans’ solo piano, the blue ballad “If Only” contains easily recognizable elements, yet never becomes rote or predictable.

To experience the full effect of Wolfe’s music, it’s wise to listen to the disc in one sitting; if that’s not possible, a block of four or five tracks at a time will do. Though all hands (including Josh Evans, whose turn on “S.T.F.U.” makes one want to hear more of him) are arresting soloists, any attempt to reduce the record to a series of individual accomplishments misses the point. In the end, it’s the group in toto that makes The Whisperer a feast for the soul and the intellect.

Track Listing: Heroist; Hat In Hand; Community; Love Is Near; S.T.F.U.; Camelot’s Lean; Chronos; All The Things You Are; The Whisperer; Becoming Brothers; The Balcony; If Only.