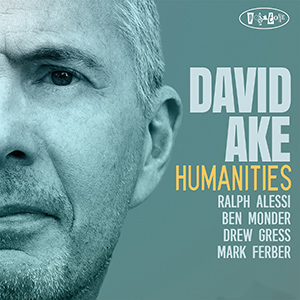 Pianist, composer, and educator David Ake is a native of New Haven, CT, but spent his formative years in Chicago. He did his  undergraduate at the University of Miami before heading to the West Coast to do post-grad work at the California Institute of the Arts and UCLA.

Ake’s fifth album on Posi-Tone is titled “Humanities” and features the powerful musical voices of his fellow CalArts colleague Ralph Alessi (trumpet), Ben Monder (guitars), Drew Gress (bass), and Mark Ferber (drums).  If you have heard any of Ake’s earlier group albums, you’ll know he’s a powerful and thoughtful pianist while his music often has a powerful forward motion.

There are moments on the new album where the music leans towards Americana, not surprisingly on the quintet’s reading of The Grateful Dead’s “Ripple” (the only “cover” tune on the CD) – they don’t mess with the gentle bluesy quality of Jerry Garcia’s sweet melody. Alessi’s muted trumpet brings the sound of Ron Miles to mind and the piece would not be out of place on a Bill Frisell album (but note the alternate chords at various times throughout the piece). The piano introduction to “Drinking Song” has the feel of a Randy Newman ballad but there is a spare quality to the melody. The trumpet and guitar play the melody and counterpoint while the rhythm section tosses and turns beneath them, not disrupting the flow as much as creating dynamic differences.

What stands out throughout the program is how distinctive all five voices are.  On songs such as “The North“, one can hear the power of the guitar, the rich melodic sense of the trumpet, the “heavy” chords from  the piano, the counterpoint and melodies from the bass, and the driving force of the drums. Ferber is truly in the driver’s seat; listen to his strength on “Rabble Rouser“, how Gress helps him push the music forward, and then how the soloists are inspired by the rhythm section.  And, they can swing! “Hoofer” starts out with the drummer’s brush work creating his own sweet soft-shoe.  Ake picks up on that and dances right through his sly Monk-like solo.  The bassist leads the group through the beginning of “Stream” – much of the fun of the piece is how the dynamics change on the fly.  After the opening, the band moves into a harder-edged melody but drops back for the piano solo.  Ake build the tension as the trumpet and guitar play a unison counterpoint to his solo. A similar interaction takes place beneath Alessi’s solo, this time the pianist and guitarist playing chordal patterns as Ferber builds the tension with a fiery drum spotlight.

The program closes with “Walter Cronkite“: that’s the newsman’s voice you hear near the beginning saying “...it’s the ultimate question that being a democracy we the people are responsible for the actions of our leaders“.  Alessi’s keening, questioning, trumpet moves atop the rumbling piano, droning bass, quiet guitar fill, and active drums, giving the rubato piece the feel of an elegy, at times, a prayer.  There is a short section where the trumpet and piano sounds like a telegraph signaling an urgent question across the great divide before the music fades.

To do justice to the music on “Humanities” is truly to tell you to listen and listen deeply. David Ake composes music that asks questions, that plumbs the depth of the human spirit, and looks for the soul within the songs. And the musicians know how to transmit those questions and searches to an eager audience.  Give some time to this music; it will make you think and, perhaps, even move you to action in these often tense times.