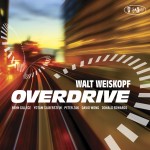 Walt Weiskopf’s harmonic vision goes full throttle on the stellar release Overdrive!
Critically acclaimed tenor saxophonist Walt Weiskopf has assembled a top flight sextet for a romp through primarily original compositions that are adventurous, inventive, and most of all swing hard! Weiskopf has always been consistent and one of the stronger lyrical players working the scene today but Overdrive would seem to find Weiskopf hitting that musical happy place of inspired and inspiring compositions that push the lyrical envelope but not the listener into the harmonic abysses.
The tunes here are forward thinking and diverse, a rhythmic whirling dervish of sound and texture with the collective working with that rare synergy of a working band that reminds one of some of the better Blue Note recordings of the mid 60’s. “Night Vision” is a blues infused swing with an articulated execution. After an opening and blistering introduction from Weiskopf, Behn Gillece, Yotam Silberstein, Peter Zak and David Wong join in for a methodical  and grooving game of follow the leader. The nuanced finesse of drummer Donald Edwards takes in the pocket to the next level and the solo work from the collective is smoldering! The articulated percussive pop of “Overdrive” features an undulating if not hypnotic rhythmic opening before Weiskopf takes off with another stellar solo performance. The only cover would be that of “What Are You Doing The Rest of Your Life?” and staying in character this odd metered reharm is taken at a brisk pace.
Walt Weiskopf achieves a dynamic offering of a cutting edge approach while never hitting those self indulgent landmines others seem to trip with ease. An all star band, smoking original tunes, and perhaps the finest recorded session to date, Walt Weiskopf has arrived!
Category: Reviews
Tags: Behn Gillece, Overdrive, Walt Weiskopf, Yotam Silberstein