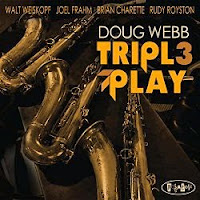 If you’re a hard-core tenor sax fan, this one’s for you. L.A.-based Doug Webb teamed with Joel Frahm and Walt Weiskopf for this triple-tenor recording, on which they’re nimbly supported by rising stars Brian Charette on organ and Rudy Royston on drums. They tackle a variety of jazz standards and originals (two apiece from Webb and Weiskopf, one from Frahm).The many gems include their takes on “Avalon,” ”I Concentrate on You” and Lou Donaldson’s burner, “Alligator Boogaloo,” as well as Weiskopf’s “Three’s a Crowd” and Lanny Morgan’s “Pail Blues.” There’s plenty of solo space to share, but they also excel at shout choruses and a saxophone choir feel as needed.