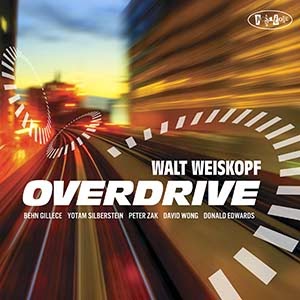 Tenor saxophone player Walt Weiskopf leads a sextet on this album, including Behn Gillece on vibes, Yotam Silberstein on guitar, Peter Zak on piano, David Wong on bass and Donald Edwards on drums. All of these musicians acquit themselves admirably, but is is Weiskopf’s show and his muscular tenor saxophone is the center of attention throughout. Steely modern mainstream jazz is the order of the day and the leader particularly excels on fast paced material like the opening song “The Path Is Narrow” and the composition “Like Mike” which is presumably titled in honor of the late saxophonist Michael Brecker. “Night Vision” and the closer “The Biz” swing mightily, and allow for a round-robin series of solos, highlighting each band member’s talent.