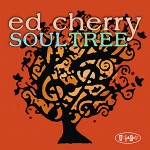 Like any jazz recording worth its salt, Ed Cherry‘s Soul Tree, his second release for the Posi-Tone imprint, impresses on more than one level. Cherry’s interpretations of often performed jazz standards—Mal Waldron‘s “Soul Eyes,” Dave Brubeck‘s “In Your Own Sweet Way,” Horace Silver‘s “Peace,” among others—are exceptionally well drawn and stand up nicely in comparison to other versions. The disc’s ten tracks include two of the leader’s original compositions. For the most part Cherry keeps things relatively simple, illuminating the melody of each tune with aplomb and keeping embellishments to a minimum. Consisting of the leader’s guitar, Kyle Koehler’s organ, and the drums and cymbals of Anwar Marshall, the trio is fleet, cursive, almost casually articulate, short on blatant displays of ego and long on mutual support. Complete in itself, the trio possesses a fine, self-contained vibe that might suffer by the presence of another instrumental voice.

Straight-ahead swing, funk, bossa nova, and other stylistic grooves all feel natural and unforced. There’s nothing artificial or unduly calculated about the funk to swing transitions in “Let The Music Take Your Mind,” or the tasty funk coda that follows Marshall’s lithe, swinging shout chorus drumming on “In Your Own Sweet Way.” The guitarist’s tone cuts through the band, yet it contains a slightly reserved quality, as if he’s loath to stand out or take a dominant role. Cherry’s brief, no nonsense intros on some of the tracks set the right tone, never overshadowing what’s to come. Post out head activities are substantive and provide another perspective of the group’s inner workings. During his solos, Cherry frequently lands on the beat, reinforcing the band’s momentum and freeing Marshall to effusively make snapping, rumbling comments on various combinations of his drum kit at a relatively low volume. (In short, Marshall often plays a lot without standing out.) The guitarist also serves as a smart, incisive accompanist to Koehler, serving up terse, energetic chords that add an additional layer of rhythmic tension.

The difference between Cherry’s and Koehler’s solo styles is another one of the record’s winning characteristics. The guitarist’s improvisations are thoughtful and patient, filled with small, telling details, as well as subtle gradations of texture; he invariably leaves room for the music to breathe. His work on “Soul Eyes,” “Central Park West,” “Little Girl Big Girl,” “In Your Own Sweet Way,” and “Peace” seem to beg the question: Why play several notes when a single, shrewdly placed note will do? There’s a laid-back quality to Cherry’s solos that exists side by side with a bluesy sensibility. He gradually draws the listener into a refined, personal space rather than trying to make a dramatic impact. In contrast, Koehler is chatty, persistent, and often uses the instrument’s resources to make overtly emotional points. He shrewdly mixes and matches ostensibly disparate ideas and displays a penchant for reaching mini-climaxes, yet never crosses the line into excess. Amidst all of this dense, somewhat agitated activity there’s an orderly mind at work. Listen to “Little Sunflower” for Koehler’s up-tempo effusions, and “A New Blue” for his pensive side.

Top-notch material that is interpreted in a refreshingly straightforward manner, a band that wholeheartedly embraces unity, and soloists who speak concisely and with character: These are the things that make Soul Tree a recording that can be enjoyed by listeners new to jazz and aficionados as well.